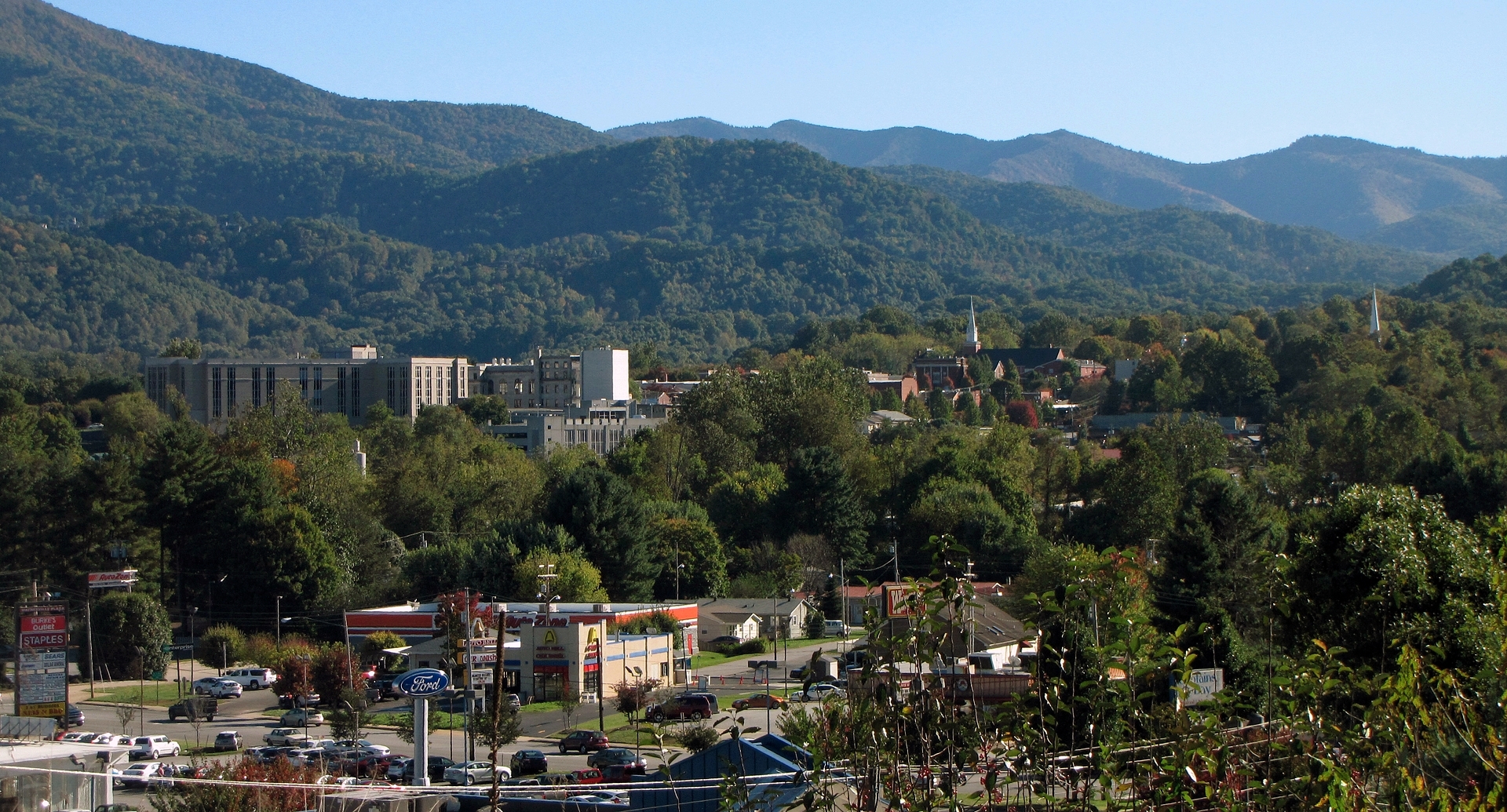 Waynesville is a town in North of Asheville between the Great Smoky and Blue Ridge mountains..Waynesville is located just outside the Pisgah National Forest and is close to the Great Smoky Mountains National Park and the Blue Ridge Parkway. Waynesville’s Main Street is vibrant,and friendly. This  small town with magnificent mountain views of the Great Smoky Mountains National Park and the Blue Ridge Parkway is an excellent location for a vacation home or year round residence. In Waynesville you will find an exceptional variety of shops, fine galleries, eating establishments, a market, a family bakery, a dog bakery and a general store. Tree lined brick sidewalks, historic buildings, relaxing benches, public art and welcoming folks make Waynesville a thoroughly enjoyable place to live and visit. Numerous popular spots for live music, a boutique movie theater, distinctive wine cellar, craft breweries, an award winning stage theater, and historic museum are just a few of the many venues you will discover.

The town was founded in 1810 by revolutionary war soldier, Colonel Robert Love, who named the town after his former commander, General “Mad” Anthony Wayne (image). Love was an American Revolutionary War soldier from Virginia.  He was born in 1760 in Augusta County, Virginia.  He joined the Virginia Militia in 1776, out of present-day Wythe County.  As a member of the North Carolina legislature, Love represented Washington County (now in Tennessee) for one year – 1879.  In 1792, he was elected to the North Carolina state senate.Love once challenged a man to a duel after an argument broke out over the matter of a horse race.  Both were duelists, but the man he challenged declined to partake.  That man would later become the President of the United States.  His name… Andrew Jackson, who would never turn down another duel.

Mountain Oak Properties is committed to helping you find real estate in Western North Carolina.  Ask us a question or use the quick search functionality to get more information on this location or other locations in Downtown Asheville. We look forward to working with you.

The data relating to real estate on this website derive in part from the Internet Data Exchange program. Brokers make an effort to deliver accurate information, but buyers should independently verify any information on which they will rely in a transaction. All properties are subject to prior sale, change or withdrawal. Neither Canopy MLS nor any listing broker shall be responsible for any typographical errors, misinformation, or misprints, and they shall be held totally harmless from any damages arising from reliance upon this data. This data is provided exclusively for consumers’ personal, non-commercial use and may not be used for any purpose other than to identify prospective properties they may be interested in purchasing. © 2022 Canopy MLS Based on information submitted to the MLS GRID as of "Updated" date listed below. All data is obtained from various sources and may not have been verified by broker or MLS GRID. Supplied Open House Information is subject to change without notice. All information should be independently reviewed and verified for accuracy. Properties may or may not be listed by the office/agent presenting the information. Some IDX listings have been excluded from this website

Please provide your name and email

Thank you for contacting us, we'll get back to you shortly.

Sorry, we are unable to send your message at the moment. Please try again later.